Edit
watch 01:36
We're Getting Mutants in the MCU - The Loop
Do you like this video?
Play Sound

Mrs. Esther Parnell-Blackmon (March 5, 1926 - August 24, 2003), AKA "The Alligator Skinned Woman" or "The Alligator Girl," had a disease called ichthyosis, which made her skin very dry and made her completely bald in all areas. She had three brothers and one sister. One of the brothers had the same condition. She was born in Kenly, North Carolina. She was married to Thomas Blackmon. Esther was also known as the "World's Strangest Mother" because in 1948 she had a child. She later had six more. All the children were normal. She acted in two known movies, "The Mutations" and "The Sentinel." In 2003, she died, twelve days after her husband.

Screenshot from the movie "The Mutations" 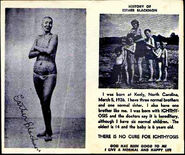