Martin Joe Laurejo (May 1885 - 1955), AKA "The Man with the Revolving Head," "The Human Owl," or "Bobby, The Boy with the Revolving Head," was born in May 1885 in Nuremburg, Germany. He was born with a twisted spine that allowed his head to turn a complete 180°. When he had his head turned, his spine was in the shape of a question mark. He was married to Amelia Emmerling, and was a Nazi sympathizer.

He moved to America from Germany in 1921 and began performing with sideshows such as Ripley's Believe it or Not, Ringling Brothers, and Barnum & Bailey. Aside from turning his head around, Martin Laurello (formally Martin Emmerling) trained dogs to do acrobatics and was a ventriloquist.

When Laurello would turn his head around, he could not breathe, however he was able to drink. Laurello was at Robert Ripley's first ever Odditorium at the 1933-34 Chicago World's Fair and had performed at many Ripley's odditoriums in the 1930s.

His last recorded appearance was on the show "You Asked For It" on March 24, 1952. He died of a heart attack and was cremated in 1955, at age 70. The video below was taken from the movie "The Incredible Life and Times of Robert Ripley: Believe it or Not!."

Laurello at a party hosted by Robert Ripley

Ripley's Believe It Or Not comic 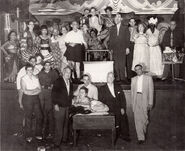 Middle row, fourth from left
Add a photo to this gallery

Retrieved from "https://sideshows.fandom.com/wiki/Martin_Laurello?oldid=5231"
Community content is available under CC-BY-SA unless otherwise noted.