Robert L. Huddleston (1895 - 1970), AKA "Ponyboy," had a strange disorder which caused him to have to walk on his hands and feet. Robert worked for the circus for 36 years and lived a full almost normal life. HE went to school like anyone else, he hunted, milked cows, and other things that farm workers would do. He could hike 15 miles a day. To Robert it was not uncomfortable to walk the way he did. He once said in an interview "I fell just as healthy and normal walking on four as the normal person feels walking on two."

Robert, in some acts around the world, even threw his right leg over his shoulder, and he would put blocks of wood under his hands ond shoes to make a a clomping sound. Any normal person would think that this condition would be unhealthy, but Robert was more healthy than an average man, and he was not embarrassed to go places and be seen by people. 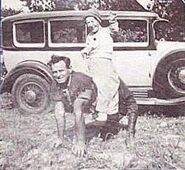 Add a photo to this gallery

Retrieved from "https://sideshows.fandom.com/wiki/Robert_Huddleston?oldid=5243"
Community content is available under CC-BY-SA unless otherwise noted.